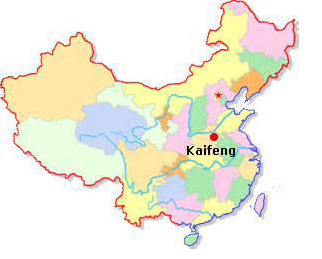 Kaifeng is located in the east-central part of Henan province in China. It has today a population of 1 million in the city center and about 5 million in the metropolitan area (Kaifeng County).

The city was one of the seven ancient capitals of China during the Northern Song Dynasty (960 – 1127) with a population of 600,000 – 700,000. During that time, Kaifeng was the most prosperous and busy city in China and the world.
Unfortunately, vicissitudes of war and floods destroyed many of the ancient buildings. The Iron Pagoda (1049) is the oldest landmark in the city measuring 54.7 meters (179 ft.) in height. However, many of the historic buildings were rebuild accurately in the last 40 years.

Chrysanthemum is the flower of Kaifeng. The city holds every year in October the Kaifeng Chrysanthemum Festival with different chrysanthemum flowers in all scenic spots but also at major intersections and buildings in the city.